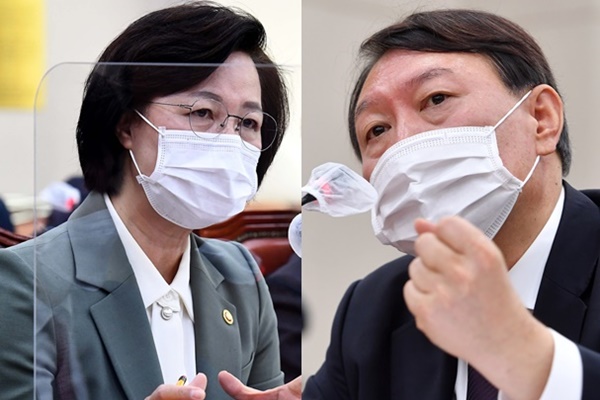 Anchor: The Justice Ministry is expected to convene a committee as early as next week to decide the degree of disciplinary action against the nation’s top prosecutor, who was suspended from duty over a number of allegations. Justice Minister Choo Mi-ae announced the unprecedented move in a press conference on Tuesday.
Sam Len reports.

Report: South Korea’s top prosecutor’s office is now being led by an acting head, while the Justice Ministry plans to convene a disciplinary committee as early as next week to determine the degree of punishment for Prosecutor General Yoon Seok-youl.

Justice Minister Choo Mi-ae suspended the prosecutor general from his duties on Tuesday citing “serious misconduct.” It marks the first time in the history of the Constitution that the justice minister has suspended the top prosecutor.

Choo announced the unprecedented move in a press conference, saying she could no longer tolerate Yoon continuing his duties following the discovery of several alleged violations.

Choo said the ministry has looked into several allegations of corruption against Yoon and verified “serious and grave” suspicions of misconduct, including an inappropriate meeting with the owner of a major media company.

The minister also accused the prosecutor general of obstructing an investigation into himself by refusing face-to-face questioning by inspectors from the ministry and failing to maintain the political neutrality required of prosecutors. The minister’s decision followed a longstanding conflict between the two over prosecution reform.

But the prosecutor general issued his own statement claiming his innocence and vowed to take legal steps to counter the justice minister’s decision.
Sam Len, KBS World Radio News